To think of your striking a stuffed man, like the poor Scarecrow! 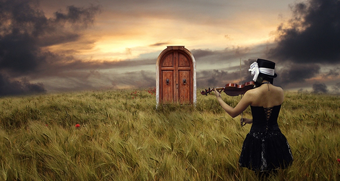 „We must protect him ourselves if he is in danger,“ replied the Tin Woodman.

Just as he spoke there came from the forest a terrible roar, and the next moment a great Lion bounded into the road. With one blow of his paw he sent the Scarecrow spinning over and over to the edge of the road, and then he struck at the Tin Woodman with his sharp claws. But, to the Lion’s surprise, he could make no impression on the tin, although the Woodman fell over in the road and lay still.

Little Toto, now that he had an enemy to face, ran barking toward the Lion, and the great beast had opened his mouth to bite the dog, when Dorothy, fearing Toto would be killed, and heedless of danger, rushed forward and slapped the Lion upon his nose as hard as she could, while she cried out:

„Don’t you dare to bite Toto! You ought to be ashamed of yourself, a big beast like you, to bite a poor little dog!“

„I didn’t bite him,“ said the Lion, as he rubbed his nose with his paw where Dorothy had hit it.

„No, but you tried to,“ she retorted. „You are nothing but a big coward.“

„I know it,“ said the Lion, hanging his head in shame. „I’ve always known it. But how can I help it?“

„I don’t know, I’m sure. To think of your striking a stuffed man, like the poor Scarecrow!“